Been a long time

I thought about my blog the other day and decided to come back to visit. After reading through old posts, I felt compelled to write again. I am sure that no one is visiting this page by now, not that it matters. I never started this so people would read what I had to say. I did it so I could have a place to release my sadness, my anger, my grief. Writing was a way for me to process what I was feeling, and to help me heal. I realized that I have come a long way. It has been 6 years since we last said goodbye to Gavin and Parker. So much has changed in my life, so much more happiness. I have two beautiful, healthy, rainbow babies. They are 5 and 2. They bring so much joy to Chad and I. I guess that is why they are called rainbow babies in the first place. They were and are the hope after that terrible storm. I am also now a co-facilitator of a support group in my area. I decided that I wanted to do something with the pain that I had been feeling. The boys give me strength to make it through everyday. Now that 6 years have passed, I have lost some friends and family members have went away. But I have met some new friends that have become family. We still attend all the Share events and visit the cemetery all the time. I love that they are still very much apart of lives because I was scared that they would be forgotten or just fall by the waste side. I still think about them every single day, and still when I see twins or hear people talk about them, I tear up. I am proud that my living children know and talk about the boys all the time. A few days ago, My kids each got a balloon and my daughter said that we had to get one for Parker and Gavin to let go up to Heaven. It was so sweet, and makes my heart so happy!! Well that is it for now. I don't know when I will be back.
Posted by 2andcounting at 10:52 PM No comments:

I cannot believe it has been two years since I last held my boys. My heart is breaking. I am just not sure how to feel right now. I hate being sad. I hate this feeling. I miss them so much every single day. Having Brooklyn makes me realize everything I missed having twin boys. I wonder where I would be today if they were still alive. What would be doing if we had two 1 1/2 year olds?

I keep going back to when we were told we were having two babies. I was 8 weeks along. It was my first ever ultrasound, and both grandparents were there. I was shaking but man I was so excited. I thought it was the coolest thing as there are no twins in the family. Then a few months later my dream was crushed. There was no stopping them from being bornand there was nothing the doctors could do to save them.

Looking back, this could have been prevented. I seriously blame myself. I was in pain and just brushed it off. if I would have went in on Thursday when the pain started there are a number of things they could have done. They could have stitched me up, but me on bed rest, and give the boys steroids. My sister was born 3 months early, this is what they did and she survived. I just wish I could go back to that week.

All I'm doing is rambling but it feels good to get it off my chest.
Posted by 2andcounting at 3:37 PM No comments:

Been a long time

I cannot believe I have went this long without writing here. I am ashamed. This is exactly what I wanted to not happen. In no way have I forgotten about my boys, I think about them every day but I don't spend all my attention on them. Now that time has passed people don't bring them up anymore. When I was grieving, all my time and energy went to them. Now that time has passed and has healed my heart that is not true. I wish I could give them as much attention as I do Brooklyn but that will never be the case. I just don't know what to do. I miss them so much, and I wish they could be here with me.
Posted by 2andcounting at 2:49 PM No comments:

I miss my boys so much. I feel like time is flying by, and they are being forgotten. I just want to hold them again. I regret not taking more pictures of them. I regret not doing a lot of things. I want to go back and change things. They would probably be here today if I would have done things differently.
Posted by 2andcounting at 9:56 AM 2 comments:

I know I have Brooklyn, but I just want to be pregnant again. And not so much as missing being pregnant, but I miss the innocence of it. I will never get that back, no matter how much I try. Our friends are having their baby any day, and I am happy for them. But I get hit with a pain of jealousy every time I hear about.

I just need to cry. I haven't had a good cry in a long while. I miss my boys so much. I wish I could hold them just one more time. I want to kiss them and tell them how much I love them.
Posted by 2andcounting at 3:41 PM 1 comment:

What was the purpose for this?

Lately I have been struggling with why my babies had to die. People say there is a purpose to everything, everything happens for a reason. Well what is the reason for my babies dying? I wish someone would tell me. Did God think I couldn't handle two babies at one time? Did he believe that I was too young to have children? Why did Brooklyn make it here, and they didn't? I am grateful for her being here, but I just don't understand. Maybe if I knew the purpose, I could feel more at peace.

I remember the day we found out we were having twins. I just couldn't believe it. I never even thought of it as a possibility, since there are no twins in our families. I was shaking, but I cannot tell you how excited I was. There was never a doubt in my mind that I couldn't do it. Now Chad, on the other hand, was a little scared and worried, but began to get excited. I just want to go back to that time. That innocence. That excitement. I want to hold my babies again. I want all three of my babies here in my arms. My heart is torn.
Posted by 2andcounting at 12:13 PM 4 comments: 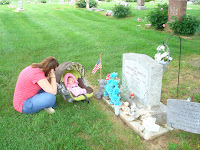 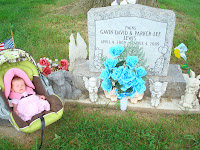 We got to go home last weekend, and we took Brooke to the cemetery. I wish the boy's were closer so we could visit more often. But it was a nice day and we just sat out there for awhile. Brooke was awake the whole time, which I loved. There was also a very special moment. When we were getting ready to leave, Chad asked Brooke if she was ready to go and I swear she lifted up her index finger as if saying one minute and then put it back down. So we stayed for a few more minutes. It was so cute.


Mommy loves you Gavin and Parker. There is not a day that goes by that I do not think about you.
Posted by 2andcounting at 4:24 PM 1 comment:

This was taken right after birth. Gavin is darker and more developed because he was taking in more nutrients.

Go ahead and mention my children,
The ones that died, you know.
Don't worry about hurting me further.
The depth of my pain doesn't show.
Don't worry about making me cry.
I'm already crying inside.
Help me to heal by releasing
The tears that I try to hide.
I'm hurt when you just keep silent,
Pretending they didn't exist.
I'd rather you mention my children,
Knowing that they have been missed.
You asked me how I was doing.
I say "pretty good" or "fine".
But healing is something ongoing
I feel it will take a lifetime.
~ Elizabeth Dent ~

2andcounting
Chad and I lost our twin boys, Parker and Gavin, on April 4, 2009 due to IC at 22 weeks gestation. After a few minutes, they grew wings and flew to heaven. We will forever be the parents of two beautiful baby boys. Now we have a rainbow baby on the way, and this is our life after loss.